VersaGrade is a licensed certified Ram Jack Installer, and is happy to provide Ram Jack solutions. Ram Jack recently was able to participate in the very first liquefaction simulation test of remedial Ram Jack helical piles ever to take place in the United States. The shake test occurred on April 2, 2019, at the University of California, San Diego and was sponsored by PEER (the Pacific Earthquake Engineering Research Center), which is a consortium of universities along the west coast dedicated to furthering research and testing just like this one.

This liquefaction simulation test follows the credible large-scale shake table test, performed to quantify the seismic response of helical piles in dry sands. That large-scale test, also performed at UCSD, under the observation of Dr. Amy B. Cerato, Ph.D., P.E., demonstrated that helical piles far exceeded expectations during various, sequenced earthquake shaking. With the outstanding outcome of the test results, piles were once again put to the test, only this time in a liquefaction zone.

In June of 2018, the liquefaction soil box was fitted with a foundation system and block weights, and then shake-tested as a “control” test to measure the impact of liquefaction in a seismic event on a foundation with no support measures in place. The result was over 11 inches of foundation settlement, which would almost surely cause any structure to collapse.

In efforts to find a cost-effective solution to mitigate foundation failure in liquefaction zones, Ramin Motamed, Ph.D., P.E., from the University of Nevada, Reno began researching helical piles and quickly learned about Ram Jack foundation solutions. Dr. Motamed invited Ram Jack to participate in the second round of testing, but this time, measurable results were available by implementing four (4) Ram Jack helical piles.

Ram Jack helical piles were precisely installed under the same loaded footing that was used in the controlled test performed in June. The soil conditions and magnitude of the seismic force were also identical. Once the testing was complete, the foundation settlement was quickly evaluated and measured. Typically, the limit of settlement that a building's foundation can take is between one and one and a half inches; however, Ram Jack’s helical piles proved to perform exceptionally well, resulting in less than half an inch of settlement.

The data obtained from the test will aid engineers and code officials in revising building codes utilizing helical piles in seismic areas not only for new construction but for seismic retrofits of existing buildings. The predictable performance of Ram Jack foundation repair solutions are becoming known around the world. Ram Jack has high hopes of being involved in various seismic projects as building codes continue to become stricter in the future. They continue to lead the industry in research on the behavior of helical piles during seismic events and will continue to do so for years to come.

Micropiles are small diameter piles, typically between 3-12 inches, that are used for foundation underpinning and new construction. They can extend up to 200 feet, and provide deep foundation support for a variety of structures.

Micropiles can be useful in areas where space limitations exist or where soil conditions are not practical for the installation of helical piers or piles. They can be used in a variety of difficult soil and ground conditions such as clays, sands, silts, gravels and cobbles—even rocks and boulders.

With their versatility and bonding capability to soils, micropiles are useful in many applications including:

What Are Soil Nails?

Soil nails are usually installed on an angle to stabilize and reinforce the face of a slope or a wall, and they are often designed in a grid pattern. Similar to micropiles, they are drilled and grouted into place. Some soil nail applications also include a reinforced shotcrete surface for additional stability.

Which One Is Right For My Project? Micropiles and soil nails are essentially the same thing; the difference is in their application. Micropiles are used in tension and compression as load bearing tendons. They are made of high-strength steel casing, rebar and grout. Soil nails are typically used in steep slope or wall stabilization where the nails are installed beyond the soils’ failure plane (angle of internal friction). They use grouted, tension-resistant steel nails to reinforce the soil and create a retaining wall during excavation.

Both applications utilize a hollow bar steel tendon with a sacrificial cutting bit that is installed with a rotary-percussion hammer. During installation, a neat cement and water mixture is pressure injected down the hollow bar and through the cutting bit into the soils surrounding the hollow bar/tendon. This method of installation is called Injection BOring (IBO). IBO piles and soil nails develop their strength, in both compression and tension, by the summation of the steel tendon plus the strength of the annular soil-cement bond with its surrounding soils, referred to as the area of influence.

The area of influence is the annular area in which the soils are cemented together. Micropiles and soil nails can be installed in almost any soil condition with excellent load bearing characteristics which makes them an ideal alternative in rocky or high blow count (high density) soils where helical pile installations are not conducive. 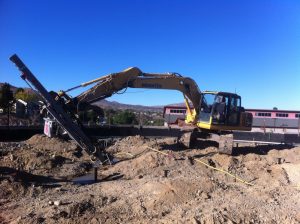 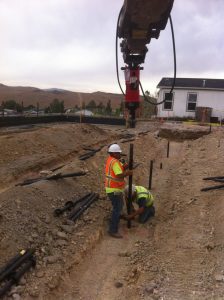 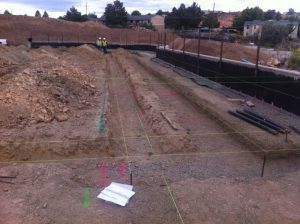